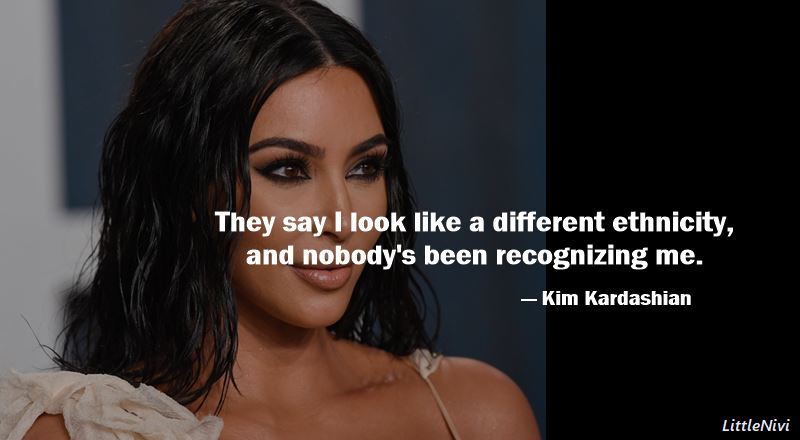 Kim Kardashian attracted public attention and became notorious for being popular, but this popularity earned her unmeasurable praise.

2. “Kim Kardashian was the first time I’ve seen a woman tormented about her weight gain while having a baby. But at least she asks for that attention by voluntarily obsessing over her weight publicly on her social media. But now nobody is safe.” — Jameela Jamil

3. “Can you ever imagine yourself in a situation like Brad Pitt and Angelina Jolie or Kim Kardashian and Kanye West, where the world feels like they have a stake in your private life? I would never want it.” — Amber Heard

4. “I love red laser therapy or red light therapy and you can do it at your home and it’s really convenient. Kim Kardashian used it to get rid of her psoriasis and I’ve been using it for years.” — Huda Kattan

5. “It’s fun being pregnant at the same time as someone as prominent as Kim Kardashian. Seeing her beautiful body change and morph makes me remember mine is doing the same, and although it may not always feel beautiful, it really is.” — Ginger Zee

6. “If I never hear of Kim Kardashian and Casey Anthony again, it would make my entire day.” — Bob Beckel

7. “I don’t quite comprehend what Kim Kardashian is, where she came from, or why we talk about her.” — Victoria Coren Mitchell

8. “In general, the more entrepreneurs we have, the better off we will be because the economy is driven by small businesses and creative ideas… I’m really excited about what the future holds for women entrepreneurship and to be a small part of that by helping Kim Kardashian and Jessica Alba start their businesses.” — Brian Lee

9. “We want to talk to celebrities about the things celebrities don’t normally talk about. Like, we’d love to get Kim Kardashian to talk to us about finance. She is a businesswoman, after all.” — Jennifer Konner

10. “I thought I was investing in myself and my brand, like Kim Kardashian. When she buys these clothes, she’s investing in herself, because she is a big brand and is likable. I thought I had that potential. My ego got too big. To think I could be someone like that when I was the most hated girl ever.” — Heidi Montag

11. “Having casual conversations with the likes of Lena Dunham and Kim Kardashian makes me weak in the knees. I have so much respect and admiration for Lena that it doesn’t matter how many times I talk to her – I get starstruck.” — Constance Zimmer

12. “What amazes me is that the whole world is fascinated by Kim Kardashian. What’s her talent?” — Tony Rock

14. “I love the characters you can build upon when you wear different things. You know, sometimes, I’ll want to be girly and wear tulle on a Tuesday, and sometimes I wanna be like Kim Kardashian and wear black leather head-to-toe.” — Poppy Delevingne

15. “Have people like Kim Kardashian really fought their way to the top on their own? Or is that just the brand they want us to see. I don’t buy it. I think we flourish by working together.” — Katie Piper

16. “I met Kim Kardashian in a nightclub once, and she was really nice. Kanye was with her, but he didn’t speak. He just looked at me.” — Chris Lilley

18. “Stuff about me dating Kim Kardashian – I have no idea where that came from and all these other rumors. I don’t think I’m that type.” — Jeremy Lin

19. “I think it’s safe to say people are going to be interested in Kim Kardashian’s love choices for the next 30 years. But they can take a minute to think about the new robotic arm that could replace the one they lost to cancer. Then they can keep thinking about Kim Kardashian.” — James Woods

20. “I met Kim Kardashian the other week, and she knew who I was! I walked in the room, and she was like, ‘I should text Kanye saying you’re here; he showed me your music.’ It’s really hard to digest. Also, I don’t think you should digest stuff like that.” — Sam Smith

22. “I really don’t consider Kim Kardashian sexy. She’s like one of those primordial sculptures of fertility, like the Venus of Willendorf.” — Alessandro Michele

24. “Every week, there’s a different equivalent of Charlie Sheen having a breakdown. I knew about Kim Kardashian getting married – and then getting divorced – and there’s no reason I should. I don’t have hostility toward Kim Kardashian – just toward the people who take that stuff seriously.” — Bobcat Goldthwait

25. “Paris Hilton and Kim Kardashian would have left little more than lipstick stains in their passing had it not been for the sex videos that lofted them into reality-TV notoriety. Once notoriety has warmed into familiarity, celebrity itself becomes one big ‘Brady Bunch’ reunion, or a therapy session with Dr. Drew.” — James Wolcott

26. “There is so much people hate about Kim Kardashian, it sometimes seems as though her critics get as much enjoyment out of her as her fans.” — Kim Brooks

27. “For me, it’s Rihanna and Kim Kardashian who I always keep up with. They both have incredible style.” — Dinah Jane

30. “My body is the way it is – it’s never going to be a body like Kim Kardashian or Angelina Jolie. We’re all different, and we’re all unique.” — Constance Zimmer

31. “I love looking at people who have achieved a lot – even Kim Kardashian, who has made a brand out of being a reality TV star; I applaud that.” — Tamara Ecclestone

33. “I’ll have men, or I’ll have women say that I’ll never be a woman because I don’t menstruate, or because I’m not made up like Kim Kardashian. So in that sense, I use makeup for a little bit of confidence. But for the most part, day-to-day, I wear makeup if it feels good.” — Carmen Carrera

34. “We live in a world of strange priorities, where Kim Kardashian buying a Lamborghini creates international headlines, but children in Niger suffering from drought and children in Britain suffering from leukaemia go unnoticed.” — David Harewood